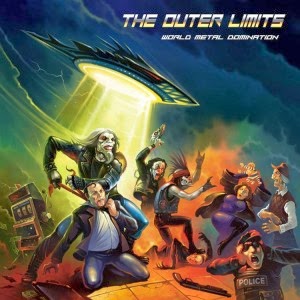 For every original new thrash band out there, there are seemingly at least 10 unoriginal ones. It’s possible that by this point, most of the ground one could cover in thrash has already been tread. There are a ton of Exodus and Slayer clones, but every week a new band pops up that worships an underground favourite from the 80’s. In this case, The Outer Limits have found the second coming of Russ Anderson (Forbidden) to sing for them. This guy sounds more like Anderson than the original himself. It’s actually pretty incredible, and is something you definitely need to hear, even if you’re not a huge Forbidden fan.

Once you get past this similarity, you can delve into the music, which is not as Forbidden-esque. It’s still very much Bay Area-influenced, but The Outer Limits don’t blow you away with technicality, and instead would be more similar to bands like Defiance and early Testament. The title track of the band shows a pretty catchy chorus atop some relatively unique rhythms for thrash. Across the next 7 tracks, the band does not ever reach the heights of this song again, but they do just enough to mix things up to keep it interesting. “The Holocaust of Dreams”, for example, gets crushingly heavy mid-way through when it slows down for some Metallica-inspired chugging. It isn’t long, however, before things speed up again and return to thrashing brutality.

The production on “World Metal Domination” should appeal to both fans of the new-school and those who don’t like a lot of newer stuff. The guitars sound good, but the main great feature on this record is that the drums aren’t completely overproduced. They’re punchy, but not to the point that the snare overtakes everything. This allows for the drumming to stand out when needed (see the double bass kicking in after the solo on "The Holocaust of Dreams"), but not to the point where you won’t hear the riffs. The bass guitar is pretty thick sounding, and cuts through the mix well. The only time where you can really fault the production is when this vocalist hits one of his crazy Russ Anderson-imitation screams, but even then, that isn’t so much the production as much as it is the sheer insanity of his voice that causes some pain on the ears.


Overall, “World Metal Domination” is pretty impressive. Forbidden is one band that hasn’t been ripped off a lot, so the vocals on this record are a nice change from the Tom Araya worship that goes on in other bands. In addition, the songwriting is really impressive. I can’t say that many of these tracks will be stuck in your head when the album is over, but the songs tend to be immediately recognizable once they start on subsequent listens. Everything comes together well on this album, and it’s hard to imagine any fan of thrash not trying to emulate some of those falsetto screams as they listen to this record.