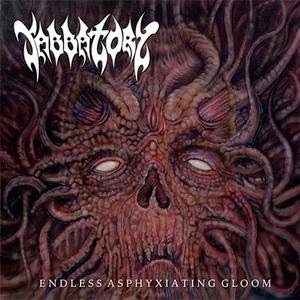 Winnipeg, Canada is certainly not the first place you think of when it comes to finding great metal, but semi-new label Unspeakable Axe Records seems to be unearthing the city’s best metal. First, the label brought us Besieged, but now they present something on a more brutal spectrum: Sabbatory, a death metal band that shares a member with Besieged and also features an ex-member of the band. “Endless Asphyxiating Gloom” is the band’s debut record, and as the name and artwork might imply, this is some truly filthy, disturbed death metal. Forget the precision and technicality of later Death and Cannibal Corpse; this release brings back fond memories of the more disgusting side of metal. Autopsy and Swedish death metal seem to be the primary influences, but there are heavy elements of punk thrown in as well.

The first thing you’ll notice on this record is the fantastic production. It evokes a completely otherworldly feel. The mix leaves a ton of space for the drums, which means that everything the drummer does sounds incredible. Whether it’s a simple snare fill, a complete roll over the kit, or transitioning to a ride cymbal (see the breakdown a minute into “Hypnotic Regression”), there is no moment of drumming that goes unnoticed on “Endless Asyphxiating Gloom”. It is also the drumming on this record that drives the punk feeling. There are still metal elements to the drumming (blast beats, in particular), but the opening to tracks like “Being, Thy Eternal Perplexor”, and “Hypnotic Regression” show an energy that can only be traced back to punk. The beginning of the latter track is sure to send Motorhead fans into a headbanging frenzy. The remaining elements to this record (guitars, vocals, bass) are relatively standard for death metal; tremolo picking and crushing riffs are plentiful and vocalist Kier Keating has some sickening growls. When using decent speakers, the bass pops out quite a bit, but is pretty much unnoticeable with poorer headphones. Where this album comes together well is the songwriting. There is enough variety in the riffing and the songs that the album is never boring. While the band often plays at pretty upbeat tempos, there are plenty of slower, sludgier sections that would make Autopsy proud. Keeping things at 7 tracks means that pretty much every song is easily identifiable, even for people such as myself who are not death metal fanatics.


After going through this album numerous times, I can’t come up with a single complaint. This collection of songs won’t ever beat out “Altars of Madness” or “Leprosy”, but it’s hard to imagine fans of death metal not heralding this as one of the best records of the year. Sabbatory are definitely on the more disturbing side of death metal, but even for those of us who like death metal a bit cleaner, “Endless Asphyxiating Gloom” is still a winner!