Massacre – Back From Beyond 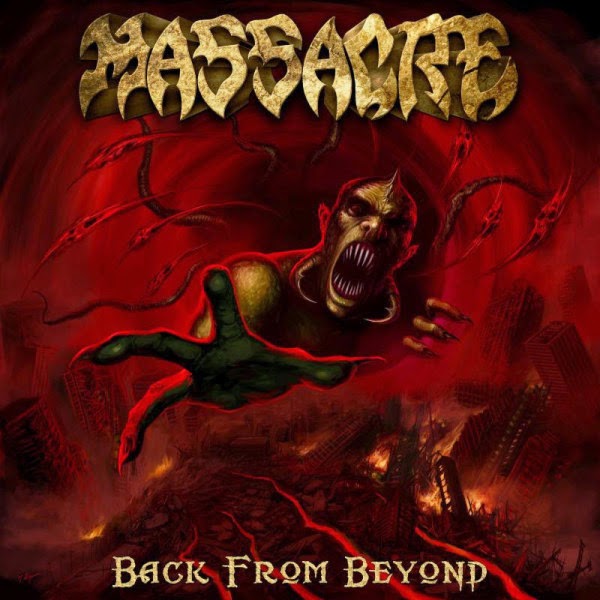 With one of the greatest old-school death metal albums under their belt, Massacre has returned a good many years later to once again provide a similar mind-blowing experience. As the name “Back From Beyond” implies, this record is meant to be nothing more than a continuation of the brutality the band first unleashed in 1991. Though Kam Lee is no longer on vocals, the core of Terry Butler and Rick Rozz still remains, and ultimately, the band manages to deliver exactly what fans of the band crave. The major new element here is vocalist Ed Webb. From what I recall of seeing the band live at Wacken 2012, he is very much a Corpsegrinder-type vocalist: crazy stage presence, fantastic enunciation, and painfully heavy in his vocal delivery, and all of this carries through on the album. For this reason, “Back From Beyond” actually is quite similar to a less technical version of modern Cannibal Corpse. The songs are all pretty short, but deliver incredible blasts of energy. The riffs and vocal lines are well crafted and end up being pretty memorable. In fact, the only thing on the album that doesn’t seem well planned and deliberate is the legendary lead guitar of Rick Rozz. As you might expect, this man’s abuse of his tremolo bar knows no bounds on “Back From Beyond”, and it really helps the band retain that classic Massacre sound. Although these solos sound like pure madness, it really shouldn’t be any other way.


Production wise, this album is pretty standard. It is a good balance between the cavernous sounds of old, and the over-produced modern sounds. In other words, this record doesn't sound like it was recorded in a shed, but it also avoids sounding fake. The one flaw with this album is that there are just too many songs. The band never really runs out of steam, but by the second half of the album, this sound gets particularly taxing on the listener. With the exception of the title track, none of the songs on the latter half of the record are impactful as the early songs. While many of the songs provide memorable moments, the sheer number of songs makes it hard to remember some of the earlier efforts by the end of the record. Nonetheless, a lot of people don’t listen to death metal for songwriting, but instead for violence and aggression, and that’s precisely what Massacre put forth on “Back From Beyond”.