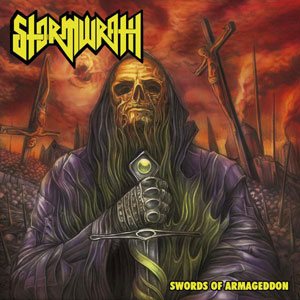 When people look back on the thrash revival in 20 years, I imagine it will be similar to how we look upon thrash in the 80’s now. There are always those compelling bands out there that, for some reason or another, never really lasted that long, despite making music better than some of their peers. This is why its crazy to think we are reaching that point in the current thrash revival. Stormwrath formed only four years ago, released one album, and has already broken up! Contrary to what this might imply, the band does a bit more than rip-off Exodus, Slayer, and Kreator like most other bands do. These guys rip-off Sodom!

Perhaps rip-off is an unfair term. The second you hear Jose Kurtz’ vocals, it will become clear that his style is based on Tom Angelripper’s. He does take a harsher approach though, not unlike what Angelripper did on “Tapping The Vein”. Despite being from Spain, Kurtz has a very similar tone to Angelripper, and his voice is so harsh that it approaches the guttural sound of death metal. Musically, Stormwrath follow a standard death/thrash assault. Blisteringly fast guitars complimented by equally brutal drumming give way to a plethora of riffs. While few of these riffs are truly remarkable, the sheer number of them is likely to get you banging your head more than a few times on this concise, 37-minute journey. There are only a few suprises on this record, but they all appear at the end. “Beyond Trinity” opens with a slower section and a nice lead melody. Towards the end of the song, the band goes into full Iron Maiden mode, with a warm driving bass line and pulsing drums. This section would not have been out of place on the “Piece of Mind” record (in fact, it sounds like that is directly where the band got the influence from). Some more upbeat riffs follow this, and while out of place for Stormwrath, they are a nice change from the monotony of the rest of the record. The following track, “Throw The Hammer”, is a short, punky affair, not unlike Sodom’s “Ausgebombt” or “Bombenhagel”. Though Kurtz still uses his standard vocal approach rather than something lighter, this track is a very stark contrast to the other songs. Finally, the closing song, “Ride The Scythe” introduces some keyboards to create a more evil, brooding atmosphere. Once again, this is not so much outstanding as it is something different. Ultimately, however, it is worth reiterating that most of this record is driven by fast, brutal death/thrash riffing.


“Swords of Armageddon” isn’t likely to be the most compelling thrash release, but I have no doubt that once more people hear about it, it will be well remembered. Unfortunately a lot of Spanish thrash hasn’t quite gotten enough exposure yet, but this is one band I have to recommend simply for its similarities to Sodom.

Highlights
"Ascend To Hell"
"Beyond Trinity"
"Throw The Hammer"