Amon Amarth - Deceiver of the Gods 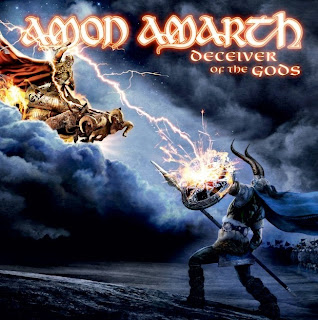 Swedish melodic death metallers Amon Amarth have returned in 2013 with their 9th studio album, “Deceiver of the Gods”. That’s pretty much all you need to know to get an understanding of exactly what this record sounds like. Based on the two singles for the album, the title track and “Shape Shifter”, this record sounded like it was shaping up to be slightly darker (certainly more evil than “War of the Gods” from the previous album). Even though they were really no different from Amon Amarth’s typical sound, they were more riff-based and overall slightly less melodic. It quickly became clear, however, that “Deceiver of the Gods” would be the logical continuation of the sound the band has crafted over their career, and, in particular, over the last three albums.

“Deceiver of the Gods” starts out with its best material. The title track features a pummeling riff before launching into the standard Amon Amarth fanfare. Johan Hegg’s inhumanly deep growls sound better than ever. His vocals have always been on the easier side to understand, but the lyrics are even more obvious now. Underneath the screams of Viking tales are the two main musical sounds of Amon Amarth: melodic leads with glorious double bass and tremolo picking rhythm guitars, or heavy chugging with every second or third note accented. The second song, “As Loke Falls”, offers a slight deviation in terms of the style of melodic lead; it sounds more like a tapping lick than the typical down-picked affair. Nevertheless, the rhythm section follows the standard bludgeoning assault. “Hel” is the only song that has any experimentation; it features some clean vocals from former Candlemass singer Messiah Marcolin. While he’s a great singer in his own right, this combination doesn’t seem to work entirely as planned. This song is really more proof that Amon Amarth should stick to what they do well. The final track, “Warriors of the North” is long by Amon Amarth’s standards, but it feels like a normal length track. It has an outstanding (albeit predictable) riff that drives the vast majority of the song, and is a solid closer to a great album.


When 6 out of the 10 songs stand out easily after the first couple of listens (and there have been plenty more listens since then!), a band as predictable as Amon Amarth has done something right. I wouldn’t say this is their best work, but it’s by far the easiest to get into of the albums I’m familiar with. It’s difficult to imagine any fan of the band being disappointed with “Deceiver of the Gods”.