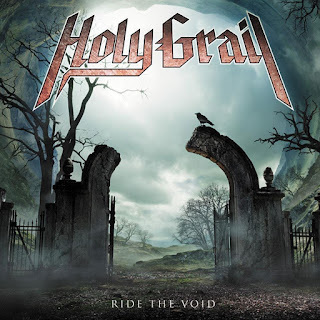 There has been no album in recent memory that I have been more worried for than Holy Grail’s “Ride The Void”. Their debut reminded me of Black Tide, a band that burned me (and many other fans) some years ago. Both bands released killer heavy metal albums that had hints of metalcore influence. Black Tide abandoned metal altogether with their second record, but the good news is that Holy Grail’s new album is a logical continuation of “Crisis In Utopia”: a fantastic speed metal album that adds in other elements in a unique way.

On first listen, “Ride The Void” is completely overwhelming. There is an endless barrage of guitar solos, almost to the point where song structures are difficult to grasp. The insane catchiness that existed on the first album is found here, but it isn’t until subsequent spins that it becomes obvious. Part of the reason this is such a tough album to digest is because of the sheer number of unique influences the band brings in. A song like “The Great Artifice” introduces the thrashiest riffing on the album, but also uses a couple of metalcore trademarks in the chorus. For example, the use of harsh vocals (in the “Why ask why” part) and the light, almost airy vocals of James Paul Luna resemble some metalcore acts. In addition, the classical influence is back; “Wake Me When It’s Over” is the obligatory classical interlude, and other tracks feature guitar leads that are very classically inspired (including one that is reminiscent of a Savatage lead). The final area where the diversity of this record becomes apparent is in the drumming of Tyler Meahl. He won’t get enough credit for his work on this record, but he has channeled Dave Lombardo and Robb Reiner’s (Anvil) ability to adapt his drumming to the music around him. Whether the guitars are playing thrashy stuff, solos, more straightforward heavy/power metal riffs, or even tremolo picking, Meahl always finds the correct beat to keep things interesting. Speaking of guitar solos, the duo of Eli Santana and new member Alex Lee (ex-Bonded By Blood) might just be the best guitar team around. Their shredding fretwork is relentless throughout the record, both in terms of the amount of solos, and the speed of them. This is one area where the band has made a huge improvement over their last record.

Despite the praise I’ve given to “Ride The Void”, it is not for everyone. If you were on the fence about the last record because of the questionable metal moments, you’ll definitely hate this album. There are more of those moments here; luckily however, the harsh vocals are much better this time around (on "Crosswinds" they are indistinguishable from a typical death metal vocalist). In addition, the songwriting isn’t as consistently strong as before. The second half of "Ride The Void" is definitely stronger than the first, but both sides have a couple of weaker tracks. Also, James Paul Luna’s vocal performance is a bit weaker overall, as he uses some strange melodies (see the intro of "Sleep of Virtue"). It’s still a great album, but when you release one of the best speed metal records of the past decade (“Crisis In Utopia”), it becomes impossible to beat, or even match it.

Be sure to check out and like Holy Grail on Facebook!
http://www.facebook.com/holygrailofficial?fref=ts
Highlights
"Crosswinds"
"Sleep of Virtue"
"Silence The Scream"