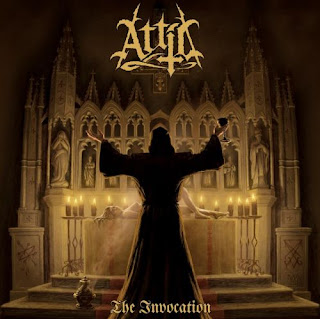 After over 4 decades of metal, it was inevitable that some bands would start replicating the sounds of the more popular ones. It seems like only recently, however, that there are bands that are a direct continuation of these legendary acts. In some cases (such as Rocka Rollas becoming the new Running Wild), this is a great thing because the releases are on par with the original band. In most other situations, it is far worse. With their debut album, “The Invocation”, Attic falls somewhere in the middle. The great band in question is, of course, Mercyful Fate/King Diamond. Surprisingly, Attic is the first band I’ve found that accurately captures this sound.

Attic all starts with the vocalist, Meister Cagliostro. This man is a dead ringer for King Diamond in his falsetto voice, which is where he spends most of his time singing. His normal mid-range voice is also quite similar to the King, but that style of singing isn’t used as often as it is in Mercyful Fate. Of course, it takes more than the vocals to replicate these two great bands, and Attic delivers on all fronts. The guitars retain Mercyful Fate’s classic riffing style, although there are definitely fewer great riffs per song. With that said, what the band lacks in riffs, they make up for in lead guitar melodies underneath Cagliostro’s singing. One element of Mercyful Fate I always enjoyed was the fantastic soloing from Hank Sherman and Michael Denner; Attic has figured that out too, and they incorporate guitar solos masterfully throughout “The Invocation”. Even King Diamond’s creepy atmosphere is recreated in “The Hidden Grave” and “In The Chapel”. These two short tracks feature church organs that haunt the listener before the great heavy metal that is about to commence. “Funeral In The Woods” and “The Headless Horsemen” (which is no doubt a nod to “Abigail”) are the most interesting songs on “The Invocation” as they have more memorable hooks. Many of the others will definitely pass you by on first listen, but are certainly not terrible. As for lyrics, you probably already figured out that these songs are about Satan, rituals, and everything else to do with the occult, so there are no real surprises there.

There’s really no need to give too much of an explanation of this album. It is near identical to Mercyful Fate with some hints to King Diamond’s material. The only real differences among these bands are that Attic can really speed things up a bit at times, but even King Diamond would do that in some of his work. Personally, I’m not actually the biggest fan of this style of bands. Of course, I enjoy “Melissa” and “Abigail”, but no other releases really captured my interest. “The Invocation” continues that trend, as it is enjoyable while it lasts, but not one of my favourite records. If you enjoy Mercyful Fate and King Diamond, this band is absolutely for you.

Be sure to check out and like Attic on Facebook!
http://www.facebook.com/atticfuneral?fref=ts
Highlights
"Funeral In The Woods"
"The Headless Horsemen"