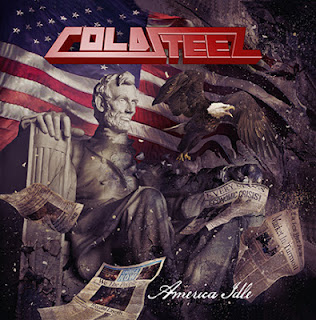 Despite my extensive love for thrash from the late 80’s and early 90’s, Coldsteel was a band I never got around to. For one thing, I honestly did not hear about them until Stormspell stocked some of their material. It’s hard to believe a band with a classic record would be so overlooked in many thrash circles, but Coldsteel has not got the hype they deserve. Luckily for us newer folk, the band is back with a new EP, “America Idle”.

Coldsteel in 2013 really reminds me of Xentrix on “For Whose Advantage”. Both bands really excel at that mid-paced semi-technical riffing. This was an area rarely explored in thrash because many bands just don’t know how to write thrash songs that aren’t fast. Two of the songs, “Ashes to Ashes” and “Blood Secrets” are a true kick in the face. These numbers are speedy, aggressive, and beyond heavy. “Ashes to Ashes” is the faster of the two, but “Blood Secrets” definitely has more replay value. The other three songs are where some listeners might lose interest. Like I said, they do the mid-paced thing quite well, but if you can’t handle that lack of speed in your thrash, it might bother you. “America Idle” (the song) is a great example of how this is done well. If it weren’t for the annoying snippets of a child talking and some media clips, this track would be truly masterful. Still, it doesn’t change the fact that the songwriting is catchy. It is these slower songs that really let drummer Hal Aponte shine. He comes up with plenty of creative beats, simply because he doesn’t have to play them at 200 beats per minute (this will be most noticeable in the title track). Vocalist Troy Norr is the other musician who I really enjoy on this record. He of course has the gruff James Hetfield/Chuck Billy voice, but he also has the ability to be quite a bit more melodic than both of those singers. Not only are his vocals stellar, but the melodies and rhythms he singers are innately catchy. Some of his vocal lines are enhanced with contrasting gang vocals, while others use coinciding gang vocals ("Blood Secrets").

“America Idle” is one of the most promising EP’s I’ve heard in a while. If Coldsteel can follow this up with some touring and an album, I’m certain they’ll get a much wider audience than they’ve ever had. Even if you weren’t a fan of the aforementioned Xentrix record, give this a shot. It’s not anywhere near a clone of that; it’s just the only album I’ve found that even comes close to it. If you are a fan of metal with songwriting that is just a step above, pick up “America Idle” immediately!

Be sure to check out and like Coldsteel on Facebook!
http://www.facebook.com/coldsteelny?fref=ts
Highlights
"America Idle"
"Ashes To Ashes"
"Blood Secrets"