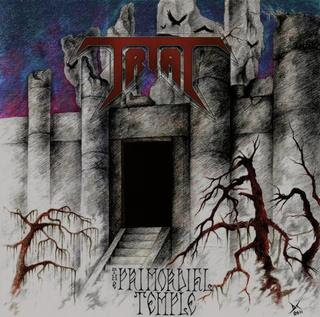 Yup, we've got yet another top-notch release from Sweden. It's gotten to the point where anytime a new band from Sweden pops up, it becomes an obligation for myself to give them a chance, simply based on all of the quality and quantity that has been coming from the Nordic land since the spawning of the metal genre itself. Trial is a band that plays some good ol' fashioned heavy metal, though not like their fellow countrymen in Enforcer, Air Raid, Katana, etc, but more like their other Swedish mates in Portrait and In Solitude who take a darker and more Mercyful Fate-driven sound, rather than opting for the Iron Maiden worshiping (although, there is plenty of Iron Maiden moments on this record). If you're a fan of the aforementioned bands, then read no further, just buy "The Primordial Temple," I promise you'll love it.

While an act like In Solitude drowns the listener in gloomy and dismal brilliance, Trial manages to take the listener on a ride of sorts, a ride that reaches exciting highs and beautiful, melancholic lows. The album opener "Flaming Fate" is one of the more upbeat tracks on this record, with its blistering intro solos and catchy midpaced riffage that is perfectly intertwined with some great melodies. The title track is one of the more somber songs due to the dreary chords that provide a terrific backdrop for Johansson's vocals, which are very soothing to the ear in their clean delivery that also adds a feeling-evoking ambiance. "Opener of the Way" is definitely one of the more unorthodox tracks on "The Primordial Temple" due to the weird melodies and riff structures, but it is solid nonetheless and conjures up the same dark feeling I've come to know and love from this band.

The other songs are similar to the ones that were already mentioned, except for the album closer "Phosphoros," a 13-minute epic that captures all of the feeling that the other songs had. Ellstrom's lead work on this record is phenomenal to say the very least. Every solo is stellar and every melody and harmony follows suit, making for a soundtrack of guitar playing excellence. The bassist also gets some moments to shine (the title track) and the drummer's performance is strong as well. With every member of the band delivering such a tremendous amount of effort, it's no wonder why "The Primordial Temple" is as great of a record as it is. Trial is a band that should not be overlooked whatsoever, though I don't expect them to because they hail from the greatest metal country in the world. Oh, and their music is fucking awesome too.