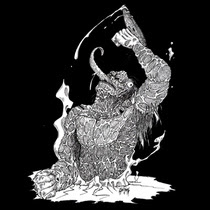 Despite brutal death metal being one of the worst subgenres that I've ever come across, brutal thrash is indeed some of the best kind of thrash (and metal in general) around. Demolition Hammer, Morbid Saint, Sadus and the like are all incredible acts that pushed the limits of the music beyond the norm without turning into another genre completely. Recently, Condition Critical has been the go-to band for the sound, and NWOTM giants Warbringer's earliest material is definitely top-notch as well. Australia's Sewercide is now another band embracing the brutality, hoping to carve out a niche in the sub-sub-genre as one of the best up and coming acts in the metal underground. And with this two song demo "Severe Trauma," they're well on their way up the proverbial ladder.

The demo kicks off with the track "Pyrocataclysm" (Gee, I wonder where they come up with that title?) and immediately the headbanging commences. The riffage is so akin to Demolition Hammer and Morbid Saint, it's scary. Seriously, these riffs wouldn't sound out of place on the masterpieces that are "Epidemic of Violence" and "Spectrum of Death" at all. The vocals also draw a lot of influence from Steve Reynolds, though they're not as powerful, but still quite good. The scream during the break of the song is incredibly reminiscent of the ones that were found in abundance on songs like "Epidemic of Violence" and "Skull Fracturing Nightmare," making the inevitable Demolition Hammer comparisons that much more accurate. The second track "Seismic Annihilation" is another rampant siege of headbanging violence that has a little more variation in the straight-forward thrashing, with a little movement along the fretboard which sounds great.

These guys are definitely one of the best new thrash acts I've come across, and I say this not only because they draw so much influence from the namesake of this webzine, but because they have that undeniable energy and passion for their music which automatically separates them from the multitudes of generic retro-thrashers that clog up the underground like a suffocating noxious gas. Fans of thrash or devastating music that could level a small village, need to check out Sewercide and commence headbanging until their vertebrae collapse.