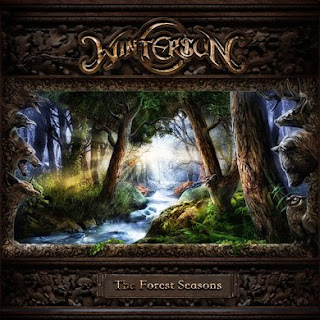 Wintersun is amongst the most divisive bands in all of metal right now, and though I understand the reasons why, the whole thing seems a bit ridiculous. Frontman Jari Mäenpää is one of those tortured genius types. He seems absolutely insane, but it occasionally results in great music. For some reason, it has led to people both worshipping his band and hating it, but this really seems like the wrong approach to Wintersun. The band is best enjoyed as Manowar-lite. In other words, everything they do is more ridiculous than the last, and though it might seem absurd that Jari crowdfunded a studio and it still wasn’t good enough to make “Time II”, all you can do at that point is laugh. The only difference between Manowar and Wintersun is that Jari is actually delusional, whereas I believe Manowar is playing the long con and just never breaking character.

For this reason, it is always a treat when new music actually arrives from Wintersun, regardless of how absurd the saga preceding it is. People are upset that this isn’t “Time II”, but it doesn’t matter because Jari can title any album anything. This very well could have been “Time II”, but the point is that it doesn’t matter at all. He’s got people hanging off of his every word (both fans and detractors). Personally, I was just curious to see if this could expand on the strengths of “Time I” and improve upon its flaws. Sadly, the answer is that “The Forest Seasons” is the worst Wintersun album to date.

“Time I” featured the band’s longest song to date, and it’s almost as though Jari felt that was the blueprint to success. But “Sons of Winter and Stars” was great because it was an epic journey that took you through a variety of sounds while still remaining compelling throughout. The four tracks on “The Forest Seasons” are bloated beyond belief, and usually contain about 4-6 minutes of great music, with the rest being serviceable. The quality changes substantially amongst the four tracks, with “Awaken From The Dark Slumber (Spring)” being the best, and “Loneliness (Winter)” being the worst. The former succeeds due to its triumphant melodies that are laden with symphonic goodness. Both the more aggressive moments with Jari growing, and the softer singing sections are worthwhile and evoke some of the best parts of the last couple discs. The song also opens with a nice groove that feels a little out of character for Wintersun, but is actually done a couple of times throughout the record.

On “Awaken From The Dark Slumber (Spring)”, it should be noticeable that Jari’s vocals have changed a bit. The growls definitely feel weaker than in the past, but to Jari’s credit, he has added some deeper gutturals to his repertoire. It results in a more brutal element that has never been present in Wintersun’s music. The vocals are perhaps most aggressive on “Eternal Darkness (Autumn)”, which is essentially Wintersun going black metal. Jari’s vocals have always leaned in that direction with his higher rasp, and this song builds some dark atmosphere (perhaps it should have been named “Winter”). There are plenty of blast beats and swirling keyboard melodies, and it’s probably the second best song simply because it is something different.

The remaining songs on the record are a mixed bag, but both weaker. “The Forest That Weeps (Summer)” takes a while to get going, but at the 7-minute mark, there is an awesome galloping melody that kicks in. The song manages to ride out the rest of its runtime successfully due to this jolt of energy. The first half of the track often manages to forget that Wintersun was a melodeath band; there’s nothing wrong with clean vocals or epic choirs, but this is far different from the band that played the self-titled debut. The only remaining track is “Loneliness (Winter)”, and it stands out as being the weakest simply for having nothing memorable. Despite several listens, there isn’t a single part of this track that comes to mind, and given the runtime of the first three songs, it could have easily been left out. This is primarily because it is a slow burner that doesn't get particularly heavy at any point. Some of Jari's clean vocal lines in this track are well delivered and evoke some strong emotions, but it ultimately doesn't hit as hard as one would hope.

“The Forest Seasons” has some additional flaws beyond the fact that the songs aren’t that good. Firstly, Jari needs to remember that he is an amazing guitar player. The debut record was filled with endless amounts of shredding. “Time I” had one guitar solo on the whole record, and “The Forest Seasons” unfortunately follows suit. “Eternal Darkness (Autumn)” has the only solo, and it is a shredfest. It’s so good that it practically makes the rest of the album irrelevant. It’s amazing that these 4 songs are 12-14 minutes each, spend minutes wandering aimlessly, and yet 3 of them lack guitar solos (which would help pad out the length).

This also brings up the second issue with the album: the songs go nowhere. Only the opener has any kind of building feeling to it. Relative to “Sons of Winter and Stars”, which had an epic crescendo unlike any other, these four tracks all feel like random parts joined together. They aren’t bad, but it just feels like this could have been 8 or 9 more digestible songs instead of 4. There’s nothing wrong with going all-out all the time, but the music still needs to be good, and the quality on this album wavers throughout.


To be fair to the band, they’ve set an incredibly high standard to date. So while this album doesn’t meet expectations, it is not as colossal of a failure as I’ve painted it to be. It’s a decent melodeath record that would gain less hatred if it were released by any other band. Because people pay so much attention to Wintersun, it somehow greatly affects them when the band falls short of expectations, but if you take this band’s releases as they come and don’t get overhyped, it’s not bad.

at 10:24 AM
Email ThisBlogThis!Share to TwitterShare to FacebookShare to Pinterest
Labels: 2017, Finland, Melodic Death Metal, the Forest Seasons, Wintersun