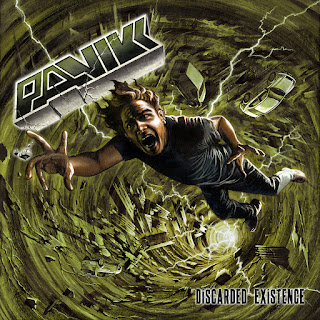 “Discarded Existence” marks the second record for Slovenian thrashers Panikk. Alongside the excellent band Eruption, Panikk stands at the forefront the thrash scene in their country, and the band’s sophomore album picks up exactly where they left off with the first record. This means that if you’re already a Panikk fan, you should know exactly what to expect. But even if you haven’t heard the band before, you should also know what to expect because this is straight-ahead modern thrash. There are no tricks or frills on this release; simply fast, aggressive riffs. The vocal approach consists entirely of shouting, with only a slight hint of melodicism. Panikk’s singer doesn’t go anywhere near as harsh as a lot of newer vocalists do, and instead opts for a Bay Area-esque sound, where he is aided with numerous gang shouts.

Throughout its 40-minute runtime, “Discarded Existence” will continually satisfy those who are happy with constant riffs. There’s no real originality on this album (except perhaps on "Individual Right", which has some more unique patterns), but Panikk does make a concerted effort to pump out as many riffs as possible, rather than relying on just a few riffs on each song. The soloing is likewise predictable, as it shows up often and is impressive, but not Yngwie-level. Like on many thrash releases, the bass and drums simply exist as a backbone for the guitars, and “Discarded Existence” is no different.


Much of this review sounds like an indictment of the band, but the simple fact is that “Discarded Existence” is a release that you will know if you’re going to enjoy it before you even hear it. Those of us who thirst for more thrash, no matter the cost, will be headbanging all throughout the album, while everyone else will probably return to their Slayer or Vektor records. Nevertheless, while “Discarded Existence” doesn’t necessarily stand ahead of some of the best modern thrash bands, it is good enough to give numerous listens to!