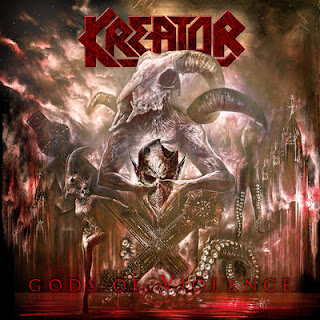 While there are still many great thrash bands from the 1980s putting out enjoyable records, few bands have managed to reinvent themselves as successfully as Kreator. The German Kings of thrash have been putting a melodic spin on their face-ripping brand of thrash for 16 years, and with “Gods of Violence”, have done it successfully for the 5th time. On the whole, this record stacks up very well against the band’s more recent releases, both in terms of the overall sound and quality.

“Gods of Violence” is an extremely front-loaded record, with some of the best and heaviest-hitting songs kicking things off. “World War Now” is the highlight of the album, as its speedy main riff will cause just as much carnage as anything on “Pleasure to Kill”. Interestingly, this riff shows a slight nod to Vektor, with its dissonant tendencies. Kreator doesn’t mess around with melody on this song as much as they do elsewhere, but the more moderate bridge makes this track an undeniably modern Kreator track. Both “Totalitarian Terror” and “Gods of Violence” offer similar combinations of brutality and speed, with an increased emphasis on melody (particularly on the title track).

A surprising gem on this record is “Satan Is Real”. This song offers little in the way of aggression or energy, but has an infectious chorus. Mille’s shouts of the title are simplistic, but enthusiastic enough to sing along to. This track really shines because the band’s melodeath tendencies come through much more effectively than they do elsewhere on the record. The band tries a similar approach on “Fallen Brother”, but fares less successfully.

The latter half of the record lacks true hits. “Hail To The Hordes” was clearly written as an anthem to Kreator fans, but doesn’t inspire some of the war chants the band had previously conjured on a track like “Hordes of Chaos”. “Death Becomes My Light” is the strongest cut on the second half of the album, in part due to its epic nature and lengthier runtime. To be fair to Kreator though, they have an incredibly high standard to be judged against. Simply because some of these tracks can’t match up to “World War Now” or “Totalitarian Terror” doesn’t mean they’re bad at all. “Side By Side”, as one example, rages with sufficient authority to make any fan of nu-Kreator happy.


And that’s really what “Gods of Violence” comes down to: how much you enjoy Kreator’s new sound. This album has its slight nuances; there are some more experimental moments, and far less emphasis on clean vocals than we have seen on other more recent records, but it’s ultimately a modern Kreator album. The rhythm playing is insanely tight, with Ventor and Mille once again leading the charge. Sami’s guitar work still feels like the natural combination of putting a Finnish guitarist in a German thrash band, and Petrozza’s vocals are as fatal as ever. The production is perfect, and this is ultimately a very professional sounding record. Whether you prefer this album to any of its four predecessors is pretty much a toss-up, as they all offer similarly enjoyable Gothenthrash. Regardless, it’s impossible to imagine a modern Kreator fan being disappointed with this album!