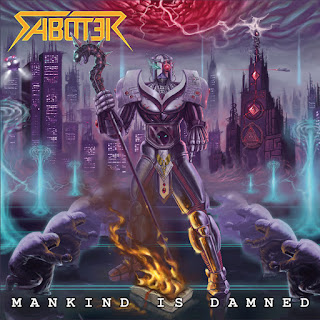 Formed in 2014, Saboter is a Greek heavy metal band that works fast. Off the heels of their self-titled EP in 2015 comes the band’s debut record, “Mankind Is Damned”. Nearly everything about this record is predictable. It is a very “by the numbers” release, as it feels as though it ticks each box required to make enjoyable heavy metal. Even the aesthetics are on point, with a vibrant cover art, a one-word band name ending in “er”, and plenty of typical metal song titles.

It should be no surprise then, that this record largely resembles a mash-up of Judas Priest and Iron Maiden (leaning more towards the former than the latter), with the occasional other influence thrown in. Every song on the record is full of charging riffs that sound like they were inspired by the “Defenders of the Faith” album. When Saboter’s singer really lets loose, he has a Halford-esque “Painkiller” scream. His lower range is actually the biggest differentiator from Priest and Maiden, as his accent is more noticeable, and he’s a bit rougher around the edges.


Whether or not blatant worship of heavy metal legends is commendable is in the eye of the beholder. There are no shortage of bands doing similar things, and I dig more than my fair share of them, but Saboter is by no means one of the elite ones. Having spun this record numerous times, I’m left with nothing memorable or catchy. It’s enjoyable enough during its runtime (though with repeated listens, I find the singer to be a bit grating), but has no hooks. There are familiar parts on each subsequent listen, but one would expect a particular track to stand out as a highlight. Unfortunately for Saboter, they ticked every box except for having passion, as this doesn’t really come through in their music. This doesn’t mean “Mankind Is Damned” is a terrible record, but it certainly leaves a lot to be desired.