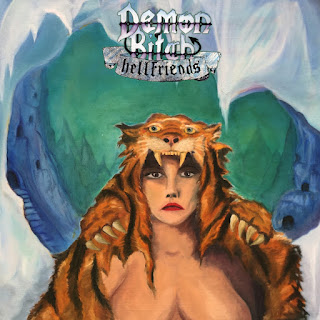 The heavy metal/USPM scene is in good hands these days with bands like Visigoth and Eternal Champion leading the way. Another new contender is Detroit’s Demon Bitch. With their debut LP “Hellfriends”, this band takes a considerably different approach from the aforementioned groups. Musically, they have more of a blue-collar USPM approach, with more aggressive, thrashy riffs. Despite this, their vocalist comes from the white-collar side of USPM (think bands like Crimson Glory, Screamer, Fates Warning, etc.). He’s a total wailer, which works both in the band’s favour and to their detriment. Regardless, there aren’t many bands that come to mind who are able to combine both sides of the USPM spectrum, which makes “Hellfriends” a compelling listen. This combination is actually most reminiscent of the excellent power/thrash band Realm, but Demon Bitch is more on the power metal side of things, whereas Realm’s roots were in thrash.

Generally, the music on this release is pretty killer. Demon Bitch has no shortage of riffs, and because this record clocks in at just over 35 minutes, the band throws everything in their arsenal at you. There are wild, unexpected tempo changes, and a general uncontrolled feeling to the music. No song gets too comfortable for very long, as the band mixes a lot of different grooves and feels into each song. The previously noted tendency to get thrashy brings back memories of some of the more aggressive Manilla Road records of the late 1980s, but Demon Bitch pushes the boundaries of speed even further (“Beneath The Ice Caves” being the fastest tune). This also comes through in the guitar solos, which are completely off-the-hook.

Though “Hellfriends” is a stellar release musically, your enjoyment of this record will come down to the vocals. Calling their singer disorderly doesn’t even begin to explain how insane he is. The notes he hits seem to be totally random, making for a somewhat incoherent result. While unique vocalists like Sean Killian or Mark Shelton have their appeal, it is more difficult to appreciate the singing on this record. It is quite likely that these vocals will grow on you with time, but upon the first few listens, they get in the way of otherwise stellar music.


The end result is that “Hellfriends” is a unique and innovative record, but is brought down by the very thing that makes it so identifiable. Some people are going to love this sound, but after multiple listens, I still fail to get past the absurdity of the vocal approach. Both Visigoth and Eternal Champion manage to be catchy and memorable with their takes on this style of music, but unfortunately, the same cannot be said for Demon Bitch. That doesn’t make this a bad record at all. In fact, it is to be commended for standing out amongst the crowd of clone bands that have invaded heavy metal these days, but it also doesn’t make it an automatic album of the year contender.

Highlights
"Beneath The Ice Caves"
"Hellfriends"