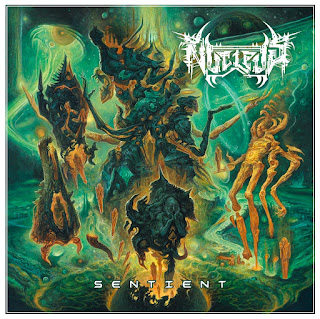 2016 seems to be the year that sci-fi is absolutely exploding in metal. Sure, it’s been done before, but now everybody is doing it. For that reason, it is only appropriate that one of the best sci-fi death metal bands, Nucleus, is finally releasing their debut on Unspeakable Axe Records. This album shows the band evolving and improving from their first two EPs, culminating in a wicked, twisted death metal group. Twisted is the key word because the riffs on this album are weird. Much in the same way that Immolation uses strange tons of dissonance, chromatics, and pinch harmonics (with “Cantos” featuring the most potent pinch harmonic), Nucleus also adopts these wilder sounds.

The general approach to the rest of the band’s sound will be familiar to fans of death metal. There is a moderate amount of blasting (fortunately not too much so as to make everything indistinguishable), tons of tremolo-picking, and growled vocals that are largely indecipherable.  Tempos are generally high, but the band has a superior ability to get doomy at times. These sections, though few and far between, will annihilate your brain with their sheer heaviness ("Ancient" in particular sounds like a long-lost Morbid Angel grinder). Similarly, when the band goes mid-paced, they succeed at crushing everything in their path.


Nucleus’ style of death metal isn’t particularly conducive to creating memorable songs. When all is said and done, “Sentient” is primarily about causing intense amounts of musical mayhem in ways you wouldn’t quite expect. You might expect a conventional riff to go one way, but Nucleus ends up playing it quite differently. This is the primary appeal of “Sentient” (though the killer artwork and imagery don’t hurt either). There isn’t too much else to say about this release because one look at it, and you probably have a good idea as to whether or not you’ll like it.