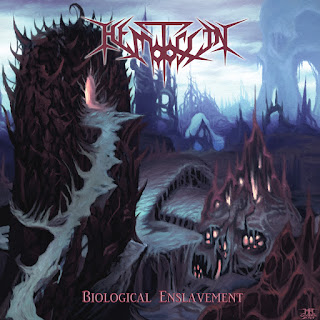 “Biological Enslavement” is Hemotoxin’s second full length, and comes a couple of years after their last EP, “Alchemist”. If you’re familiar with the band already, this album picks up where “Alchemist” left off, but turns everything up a couple of notches. For those who haven’t had the fortune of hearing Hemotoxin before, you can expect technical death/thrash metal in the vein of many of the subgenre’s leaders. These Californians are clearly influenced by bands like Vektor and Voivod (though who isn’t at this point?), but they take the extremity and brutality even further, while still incorporating other influences. Although this is most evident in the vocals, it is actually the guitars where this element is first noticeable. The production is extremely sharp, to the point where some of the lower, buzzing riffs almost feel painful to listen to (pain being a positive factor in this case). Indeed, this brings back memories of guitar tones from a band like Razor, who had a delightfully vicious assault. As noted above, however, Hemotoxin’s vocalist is also extremely aggressive. Combining the general understandability of many thrash vocalists, with a slightly guttural approach, he reaches somewhat of a Mille Petrozza-type sound.

One might expect that because of all of this brutality (which includes the occasional blast beat as well) that the band lacks melody, but that is not the case. Numerous songs have leads that that will catch your ear, with “Minus Human” taking a unique approach altogether. The start of this song sounds like a completely different band, as the group offers a softer more melodic section before getting much more technical. This particular track sounds highly influenced by mid/late-era Death. In fact, a lot of the riffs on this release sound like they could have been written by Chuck Schuldiner, which is a very high compliment.


The biggest reason why “Biological Enslavement” succeeds is because it isn’t simply a one-trick pony. Yes, there are stupidly technical riffs on this album, and if you can’t handle the more modern approach of technical metal bands, it will be difficult, but there are also still plenty of more straight forward thrash riffs to enjoy. Similarly, the balance between melody and sheer brutality (which “Forgotten Faces” often pulls off at the same time) is impressive. Overall, Hemotoxin has a good hand on a variety of styles, and is able to incorporate them into their own unique blend of death/thrash, resulting in an album well worth purchasing!