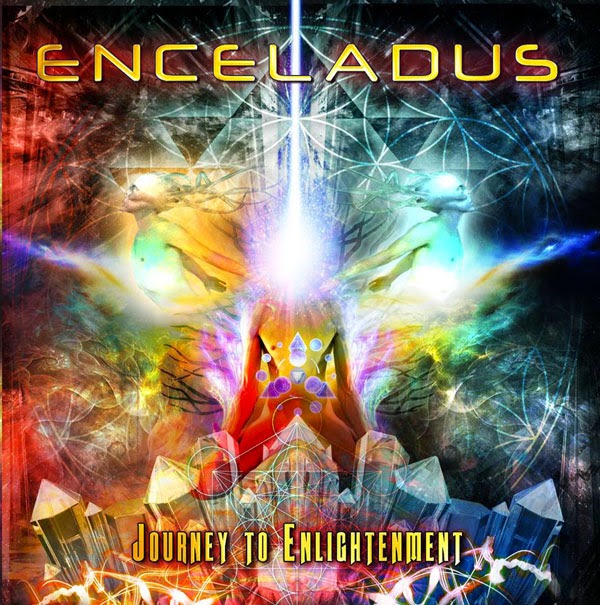 After a short, but very impressive EP, Enceladus has returned in 2014 to present their first full-length album. “Journey To Enlightenment” is pretty much everything someone could hope for in power metal. Beyond the fact that it is a well-written album, its best quality is that it has an unbridled enthusiasm. A lot of the best power metal bands are late in their career at this stage of the game, and more than a few of them sound a bit tired. Enceladus’s “Journey To Enlightenment” is a jolt of energy that will bring you back to the glory days of power metal. The title track alone is the best example: it opens the album and is nearly 4 minutes of nothing but guitar solos. This is a recurring theme on the album: there are guitar solos everywhere. Sole guitar player Geo is absolutely ridiculous on this album. In fact, there are probably more guitar solos than riffs on “Journey To Enlightenment”.

Enceladus draws inspiration from quite a few bands on their debut album. Lost Horizon is an obvious mention because both bands give off that spacey epic metal vibe. Dragonforce is another solid comparison simply because of the guitar work. While Enceladus is certainly more restrained in their need for speed, there is an unbelievably amount of shredding. Even when there is singing going on, Geo is still delivering leads underneath. As they were on the EP, Soikkam’s vocals are still impressive. He has a large range, but what improves his performance here is the vocal lines he sings. Some of these choruses are so catchy, and he does a really great job with them. In fact, this brings up the next great part of this album: the songs. With 13 tracks that are all relatively similar (high-speed power metal), this album could get boring fast. Fortunately, Enceladus is able to come up with enough hooks, catchy melodies, and memorable moments for this release to be stellar.

The three tracks that appeared on the EP are still some of the best here. In fact, “Ethereality” is the band’s strongest song because of its sheer aggression in delivering bombastic power metal. Aside from those three tracks, however, this album is still great. Another highlight, “Live Or Submit”, comes after the intro track. This song shows Soikkam at his best, delivering some high-quality vocal lines. “Darkened Aura” is another fantastic tune, in part because it lives up to its name. Geo’s leads on this song are a lot more sinister than anything else on the record, and it is certainly the song with the most variation of the record. The verses are incredibly thrashy, and provide ample headbanging material.


It would be a futile effort to go through every song and list the good qualities, as they’re pretty much endless. There are a couple of tracks that aren’t quite as strong as some others, but there isn’t a single moment of boredom on this record. “Journey To Enlightenment” is one of the most inspired power metal albums in years. While the individual elements present on this album are not necessarily original, they are combined in a way that makes Enceladus unlike any of their peers. This album truly is a journey to enlightenment!

at 8:30 AM
Email ThisBlogThis!Share to TwitterShare to FacebookShare to Pinterest
Labels: 2014, Enceladus, Journey To Enlightenment, Power Metal, USA