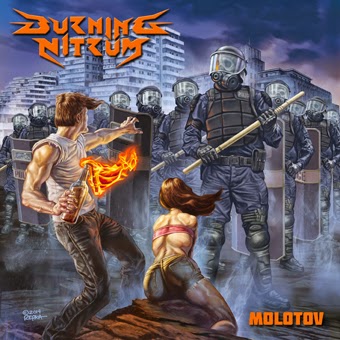 Before you even hear Burning Nitrum’s “Molotov”, you know it’s going to be good. Thrash band from Italy? Check. Ed Repka cover art? Check. Signed to Punishment 18 Records? Check. To be fair, not every band meeting all three of these criteria is the best, but a lot of them are quite good. Burning Nitrum is definitely a band that holds the flag high for thrash metal. Their style is certainly nothing groundbreaking, but it doesn’t feel as derivative of the 80’s as a lot of other modern bands. The band is relatively talented at writing great riffs, which will always improve the quality of a record. The songwriting isn’t always the tightest, but the riffs make up for it. The tempos on this album are relatively varied, switching between heavy stomping moments to face-melting thrash sections. It would be unfair to characterize songs as one or the other, because most songs manage to deliver both sounds well. The occasional acoustic or clean guitar part works its way in, but does not disrupt the flow of the album.

“Molotov” features a lot of great individual performances from the members of Burning Nitrum. One of the draws to this band is vocalist Dave Cillo. His voice actually changes throughout the record. At the start of the album, he’s a standard thrash singer, with perhaps a bit of an upper range, but as the album goes on, he’ll break out into these full on John Connelly (Nuclear Assault) worship parts. It’s pretty astounding how well he manages to emulate such a unique vocalist, to the point where you think Connelly himself is doing guest vocals. This is most noticeable in the opening lyrics of “Lying Until The End”. The other area where a member delivers a mesmerizing performance is the lead guitar work of Walter Lanotte. There is a heavy emphasis on shredding on this album, not just in the quality of the playing but also in the number of solos. Lanotte delivers some incredibly accomplished solos, which is unbelievable considering he’s only 19.

While the album starts out strong, it actually is better on the backend. The band saved some of the most assaulting tracks for last. The one-two punch of “Slave of Lust” and “Sparkling Splatter” is certainly the most enjoyable part of the album. The former song is an exercise in downpicking that would make even James Hetfield’s arm sore. These tracks are followed up with a lengthy instrumental that again shows how well the band can create riffs. The riffs are often in the Exodus vein (then again, what thrash bands aren’t playing Exodus riffs?), but it doesn’t feel like they’re borrowing riffs from anyone.


“Molotov” is an impressive effort, which shows that even though mainstream support for thrash may be dying again, the bands are not! As long as there are denim vest-wearing thrash kids from Italy, we will great music to enjoy. While Burning Nitrum will not win over anyone who isn’t a fan of thrash, the band doesn't set out to do that. This is an album that will bring out the inner Paul Baloff in everyone, so be sure to check it out if you’re a thrash fanatic!