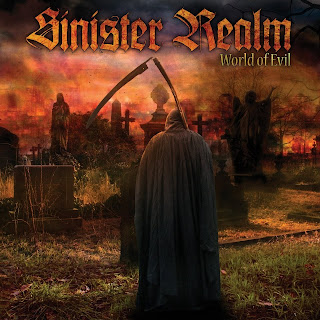 In just a few short years of existence, Allentown, PA’s Sinister Realm is already on their third record, “World of Evil”. This was my first hearing of them, and after seeing the album cover, it was clear that some serious heavy metal was about to be unleashed upon my ears. Perhaps rather than heavy, the key word here should be power. That isn’t because this is power metal (it’s not), but rather, it’s because of the sheer strength of the vocals of Alex Kristof. His ability is far greater than he ever lets on throughout the course of this record, and that is a great thing for the band. Rather than trying to deliver a consistently over-the-top performance (ala Ripper Owens), Kristof uses his normal singing voice and lets the catchy melodies take center. This is no more obvious than on the opening track, “Dark Angel of Fate”, where his voice soars over the uplifting guitar leads underneath. If it isn’t clear yet, Kristof’s performance is the highlight of “World of Evil”.

Luckily, however, the rest of the band delivers as well. Though this album is never particularly fast, there is no shortage of interesting, heavy riffs. Sometimes when bands play more mid-paced stuff (“Bell Strikes Fear” is one such rocking song), there is a tendency to become plodding and boring, but that isn’t the case with Sinister Realm. For one thing, the bass cuts through the mix consistently, making Steve Harris proud, and offering relief in case you ever want to look beyond the riffing. Speaking of Steve Harris, the bass tone is remarkably similar to any of the four Iron Maiden reunion records. Very few albums manage to command this much attention on the bass, and it is satisfying to say the least. Beyond the rhythm work and the riffs, the guitars also offer wicked harmonized leads. The best example is the bone-chilling opening to “World of Evil”, which sets the mood for a true heavy metal classic, where once again, Kristof's vocals shine in the chorus.


At this point you may have noticed that I’ve only made reference to the first three tracks. As with many records that was deliberate. These three songs (alongside “The Ghosts of Nevermore”) are by far the strongest on the album. This is definitely a front-loaded record, but unlike other similarly designed records, the remaining songs on “World of Evil” are still very good, just not up to par with the first four. Nevertheless, the record as a whole is a bit of a grower because of its slower pace, and so these other songs may become more interesting over time. “World of Evil” is highly recommended to anyone who can appreciate brilliant singing, and a fantastic attention to songwriting.
Be sure to check out and like Sinister Realm on Facebook!