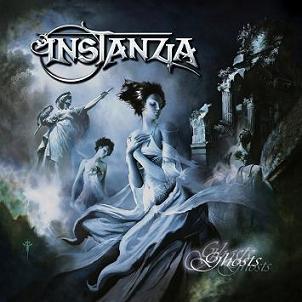 A couple of years ago I came across two bands from Quebec that both played some wicked power metal: Icewind and Instanzia. The former was a bit more accessible for me in terms of finding their records, but I was recently able to acquire the debut record by Instanzia, and it was more than worth the wait! Over the course of 7 songs (along with an intro), this band delivers one of the most undeniably catchy records in recent history. “Ghosts” is a record that is so memorable that you can seriously sing nearly every chorus on the album by the second time you hear it. To say a lot of effort went into this album is an understatement.

Things kick off with my favourite song, “Ghosts of the Past”. This song has a great lead melody before getting into a high-speed verse. The track reveals Instanzia’s excellent ability to mix keyboards and piano. The verse features a piano melody underneath the rest of the music, while other parts of the song, such as the intro, let keyboards take prominence. Don’t be confused though, this is guitar and vocal-driven record. In fact, the vocal lines are so brilliant that it isn’t just the choruses you will be remembering. Many of the verses are very easy to sing along to. Ironically, I actually feel as though vocalist/guitarist Alexis Woodbury is not the most impressive singer. His tone feels slightly emotionless and disconnected. Nevertheless, this doesn’t really detract from the music; it just gives the band a bit of a different sound. His voice gives hints of more character (see the word “strongest” in “Power of the Mind”), but he ultimately tends to stay in the same voice otherwise.


For the most part, this is an up-tempo and uplifting record. The songs all have quite a bit of speed, which is often displayed by the great double bass work in the drums. “Charming Deceiver” shows a thrashy, pounding moment that evolves into a speedy assault from the drums before heading into the chorus. It is a relatively brief section, but shows how quickly this band can change the feel of a song. In many respects, the songwriting is quite standard power metal, but the hooks are brilliant. I could go through each song to keep telling you the merits of this record, but it truly is something you need to hear to get a proper sense for. All power metal fans need listen to Instanzia or else you’ll run the risk of missing one of the best power metal records of the last few years!