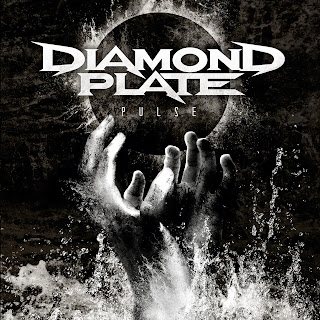 If you aren’t familiar with Diamond Plate yet, it’s worth knowing a bit of history on this thrash band out of Chicago. In the last 5 years, I cannot recall a band that opinions changed faster on. In 2009, with the release of the “Relativity” EP, Diamond Plate became easily the most hyped band in the thrash scene. It’s easy to see why: the members were all extremely young, but thrashed just as hard as any band out there. Needless to say, expectations were quite high for the debut record, “Generation Why?”. Unfortunately, most fans (myself included), were let down by how much worse the vocals became, by “At The Mountains of Madness” being slowed down considerably, and by some other strange choices. The negativity on that record was certainly overblown, but it was not what many people were expecting. While I don’t like to play the open-minded card often, if you can approach “Pulse” with no memory of the band’s history, you’ll find it quite enjoyable.

The album kicks off with “Walking Backwards”, which is the thrashiest and fastest song on the album. It will immediately become clear that new singer Matt Ares has a wicked voice. On this track, he tends to stay in familiar thrash territory, though he isn't as Bay-Area sounding as most thrash vocalists. Later on in the record, he would display that he can actually sing in a cleaner voice quite well. Matt Drake from Evile tends to display the same ability to switch between both styles well, and he is probably one of the more accurate comparisons to Ares’ voice. “Still Dreaming” and “Rainmaker” are two of the better examples of this ability, but his versatility is evident on nearly every song. Aside from “Walking Backwards”, most of the songs stay in the mid-paced territory. Though “Face to Face” opens with a ripping thrash riff, it quickly returns to the more common plodding tempo. Although the rhythm guitar playing may differ from what you expect, the lead playing is as solid as ever. This is best displayed in the instrumental, “Persistence of Memory”, which is one of my favourite tracks, as well as on "Bottom of the Glass". Where “Pulse” really shines most is in the unique rhythms used in the riffs. Don’t interpret this as Diamond Plate going djent; they’re still playing thrash, but they’re putting much more emphasis on leaving short rests in some of the guitar patterns. A prime example of this is the verse riff in “Price You Pay”, which is a short burst of energy, unlike any other typical thrash riff. Relative to their contemporaries, Diamond Plate has actually managed to create something much more unique. While I love Exodus, Slayer, and Kreator, there was more to the thrash scene in the 80’s than just those bands, and Diamond Plate really display homage to a variety of other thrash bands (Cyclone Temple and Death Angel come to mind for me). There are still clear homages to the aforementioned bands (“Dance With Reality” opens with a classic Exodus chugging riff), but overall, this record isn't another "Bonded By Blood" clone.


There isn’t too much to be disappointed about with “Pulse”. Sure, the minute and a half intro to “Still Dreaming” is completely unnecessary, but it really doesn’t affect the record too much. Ultimately, if you can come into this album with a proper perspective, you will definitely enjoy it. It already stands out as the most unique thrash record from 2013, and hopefully is a style that the band can build on in the future.

Highlights
"Walking Backwards"
"Dance With Reality"
"Bottom of the Glass"