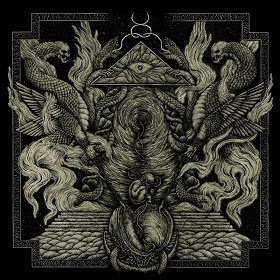 2012 may have been the year of death metal, but 2013 already seems poised to blow last year's output out of the water. With awesome albums by the likes of Tribulation, Zombiefication, and Terminate already eviscerating metalheads this year, Vorum looks to add their name to the unholy list. "Poisoned Void" is the group's debut full-length and it's monstrous to say the very least. The band may hail from Finland, but don't expect to hear any derivative aping of the gods that came before in Convulse, Demigod, Purtenance and the rest, because these lads bring a fervent mix of sounds that channel bands like Autopsy to Morbid Angel all the way over to Incantation, making for a very enjoyable listen that doesn't leave the listener thinking they should've just thrown on "insert classic '90s death metal album here."

It's hard to stand out in today's over-saturated death metal scene, but the cream always rises to the top and Vorum are well on their way and that's because they simply "get it." The music here isn't overly complex and they're not trying to cram in a bunch of riffs with some evil melodies here and there, rather they take the tried and true way of making ancient death metal, using a lot of tremolo riffage to back the harsh and very awesome growls of Jonatan Johansson. Seriously, about 90% of the riffs are rapid tremolo bursts, which can tend to get real old real quick, unless you know what you're doing like these Finns do. This band doesn't rely on sounding overly evil or incredibly heavy, rather they get their point across with quality riffs that build off of each other to keep the listener enthralled.  The superb songwriting shows through immediately on the opening track "Impetuous Fires," which flows so smoothly and effortlessly because the riffs are written to escalate to insane climaxes and then to slow down and just crush the listener with a doomy riff or short midpaced crusher.

Of course, there's more to the music on "Poisoned Void" than just a bunch of fast riffs. There's an underlying murkiness to the music (think Autopsy) that is always present, but even more so when the band breaks away from the faster stuff and slows down. The drummer and bassist also get passing grades for their work throughout the record, as they don't distract from the focal points of the songs, instead lending their services to add to the heaviness and intensity. And while I'm giving grades away, the lead guitar work gets an A+. The solos bring the perfect balance of shredding and melody to the table and serve as another enhancer for the overall songs ("Rabid Blood" in particular") rather than just a sideshow for the lead guitarist to show off his skills. Vorum have definitely made an impressive debut with this album and you owe it to yourself to check them out if you're a fan of rotting, decrepit, old-school death metal. As much as I love the bands who find themselves a particular niche in the death metal realm and can produce quality stuff, this quartet has forsaken the need to stick to a single style and has developed a sound that encompasses the death metal gamut nicely much like other new acts in Horrendous and Degial. In the words of the great Martin Van Drunen: "This is real death metal you bastards!"