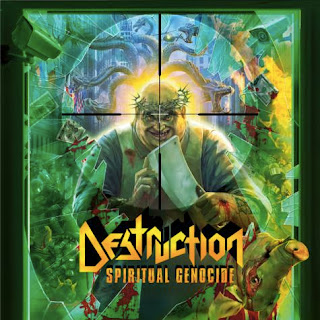 For better or worse, there is perhaps no more predictable band over the last decade-plus than Destruction. Since “All Hell Breaks Loose” the band has released record after record of heavy, thrashy material. Like most others, I’m of the opinion that the first two comeback albums were quite strong, but the quality has waned since. It was not until 2011’s “Day of Reckoning” that I really started enjoying Destruction again. After witnessing the band live in 2012 (which one absolutely one of the most brutal, punishing performances I’ve ever seen), my expectations were high for “Spiritual Genocide”.

As you might expect, the album kicks off with a standard, post-2000 Destruction song. And then another, and another, right up until the end. There is no variation on Destruction’s sound on “Spiritual Genocide”, but that’s not a bad thing. The reason recent Destruction albums suffer is because they quickly abandon full-throttle thrashing for mid-paced, grooving riffs. Luckily, many songs on this record kick off with speedy riffs that are clearly the brainchild of Mike Sifringer. Just when things really get going, however, the band tends to revert to the aforementioned chugging. The only exception to this is “Under Violent Sledge”, which is far and away the most intense, enjoyable song. The song is just over 4 minutes of relentless brutality that Destruction hasn’t been offering recently. The other songs generally live or die based on the memorability of the choruses. While Sifringer used to be a masterful lead player, the quality of his playing has diminished lately. Schmier still has some bite in his voice, but he doesn’t use too much of the high shrill scream he is famous for. New drummer Vaaver really doesn’t sound any different than those who preceded him. He provides the appropriate use of double-bass, but doesn’t do anything to stand out. It would be unfair to say the band is phoning in this performance; it is by no means their worst album of the last decade, but this is a step down from “Day of Reckoning”.

“Spiritual Genocide” will be exactly what you expect of it. If you still enjoy bits of Destruction here and there (like me) this is worth buying. If not, it is still worth hearing just to see if it clicks with you. This band could do a lot better, but they definitely could do a lot worse.