Lich King - Born of the Bomb 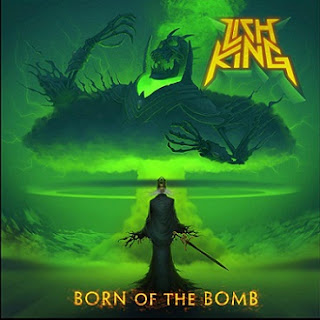 Talk about surpassing expectations. I've been a fan of Lich King since I heard their "Toxic Zombie Onslaught" record back in early 2010 and it's safe to say that these guys get better and better with every release. While many have labeled these guys as "generic" or another "Exodus clone," it will be incredibly difficult to say that after listening to their latest record "Born of the Bomb," which is easily their best release yet. Fuck it, I'm gonna go out on a limb and say that this is one of the best thrash records... No, one of the best albums of the year period. Even as a somewhat longtime fan of the band, I had no idea that Tom Martin and company could conjure up something this damn good, but I'm not complaining. This album is a non-stop headbanging marathon filled to the brim with awesome riffs, reminiscent of bands like Vio-Lence and Morbid Saint. And for those who may worry that these guys have given up their funny and sarcastic lyrics, there's no need to fret, because the tracks are just as silly (I mean that in a good way) as before.

The music on this album is a breath of fresh air from all of the super-serious bands out there who repeat themselves to death about satan, evil and darkness, as the jokes continue to pile on through the songs. If you thought that the song "Black Metal Sucks" pissed off a bunch of (uptight/butthurt) metalheads, I can't wait to hear what people think of "We Came to Conquer," a song that calls out pretty much every major new thrash act today. Luckily for the King, the riffs and music backing Martin's barks is top-notch and provides plenty of evidence that they just might be the best band today. "Fan Massacre" is another track made to make people laugh while they headbang themselves into delirium, as the band jokes(?) of killing their fans for not buying enough merch or asking too many questions, and much like every other song on "Born of the Bomb" the music is terrific. No strangers to doing cover songs, the band also did a fantastic cover of Agent Steel's masterpiece "Agents of Steel," and it's executed quite well if I might add.

Of course, this record also travels a different path than the ones before, as this is the band's most vicious and intense release yet. "In the End, Devastation" is an absolutely punishing song that would make Demolition Hammer proud; the riffs are pummeling and the vocals possess a pissed-off, violent edge to them that sounds awesome as the words flow with the ferocious music perfectly. "Wage Slave" even features blast beats and some Skolnick-esque melodic soloing which added some depth to the very straightforward thrasher. "Agnosticism" is unashamed "Master of Puppets" era Metallica worship done right, as the song spans eight minutes and features clean guitars, epic soloing and some very heavy riffage. And how could I forget about the album-closer in "Lich King IV (Born of the Bomb)" which features rapid-fire, dueling vocals between Tom Martin and Patrick Lind of the legendary Morbid Saint. Like I said before, this is what 2012 has been lacking and that is some good ol' fashioned friendly violent fun in the vein of the old masters. "Born of the Bomb" is definitely a contender for the best of 2012 as it serves it's purpose, which is to cause a frenzied reaction to the music, and to silence the elitist metal cunts who need to be drawn and quartered.

Highlights
"We Came to Conquer"
"In the End, Devastation"
"Lich King IV (Born of the Bomb)"