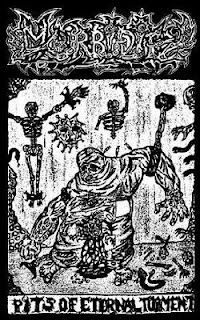 It’s amazing how the brilliance that is death metal transcends to every part of the world. Who the hell would have thought that a band like Morbidity, one who channels bestial death metal at its finest, would pop up in Bangladesh? I certainly wouldn’t have, but luckily these guys found me and I must say I’m quite pleased with this four-track demo “Pits of Eternal Torment.” Even more peculiar is that these guys don’t worship at the altar of Incantation or Entombed like the majority of the newer acts these days, rather they deliver some absolutely filthy music in the vein of bands like Nunslaughter, Abhorer, and (early) Morbid Angel and they do it pretty damn well.

The three original tracks here all really follow the same pattern and style. There’s some solid death metal tremolo sections that are meant for evisceration, not for atmospheric purposes or anything else, just simple destruction (See “Let There Be Chaos“). There are also a lot of heavy riffs that groove along and get the listener to bang their head, similarly to Nunslaughter and Pungent Stench (See "Morbidity"). Even though I said this band doesn’t go for any kind of atmosphere or aura, the music definitely has a vibe of sloppy madness that reeks of Repulsion on their masterpiece "Horrified" and it suits the extreme violence on this demo perfectly.

Defiler’s vocals aren’t anything overly special but they compliment the intense music nicely and the same can be said for the drums and bass. Nothing too fancy, just sheer aggression that demands the listener’s attention. “Pits of Eternal Torment” is exactly what a demo should be, it’s short and sweet and leaves the listener wanting more, so if you’re a fan of any of the bands that I compared Morbidity to, then you had better check these guys out, especially since they have a great cover of one of Nunslaughter’s best songs in “Killed by the Cross,” oh and their music kicks ass too.