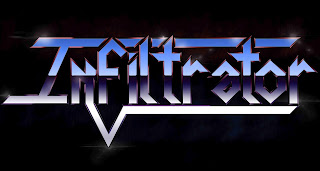 It seems in today's scene that America's east coast has been dominated by tremendous metal acts that span different subgenres, from the thrash titans in Lich King, Hellcannon and Condition Critical to the death metal masters in Disma and Horrendous, there are always great bands that continue to pop up. Now it's time to add another band to the other defenders of the faith, and that would be the speed metal act Infiltrator. At the moment this is nothing more than a one man project, but the two songs on the debut demo are absolutely top-notch and even original, making the band one that is in dire need of some attention in the metal underground.

While most speed metal nowadays usually sticks to the derivative fast riffing and high-pitched vocals, Infiltrator completely shits on the norm and both tracks on this demo would put a lot of today's speed metal bands to shame. The song "Crush the False" opens with a guitar solo that consists of some sweet tapping skills before you get a crunchy riff that is soon followed by Steve Jansson's harsh vocals that are entirely reminiscent of Matt Harvey from Dekapitator or Sheepdog from Razor. The chorus for this song is incredibly catchy and will be stuck in your head for quite a while, plus the phenomenal lead guitar work will mesmerize you when you're not banging your head. The other song "Hell Ripper" isn't much different. The riffs aren't blatant e-string worship, but instead there are minor glimpses of technical proficiency and even a little bit of melody, similar to early power metal acts such as Omen or Jag Panzer. There's also a clean interlude with some fantastic guitar solos that creates an epic atmosphere to close out the song in a big way, leaving the listener with a very memorable impression.

Infiltrator has created some top-notch material with this two song demo and the amount of originality for music in a subgenre that is so easy to be generic in is astounding. My hopes are definitely high for the future of this band and it's really only a matter of time before they join the elite bands atop the east coast metal scene.