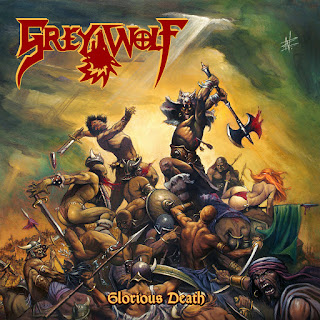 Brazilian heavy metal band Grey Wolf recently unleashed their third full-length record, entitled “Glorious Death”. This album marks my introduction to the band, and it is proof that I should have been on the Grey Wolf bandwagon from the beginning because this is seriously well-written heavy metal with a penchant for being catchy. The band’s general sound apes the first couple of Iron Maiden records, and is not dissimilar to early Omen either. The song titles sum it up well, with tracks like “The Barbarian” and “Conan The Liberator” being exactly what they sound like: manly heavy metal with intense riffs.

Grey Wolf differs from many of the bands taking this path though, because their singer is a lot rougher around the edges. Even comparing him to someone like Paul Di’Anno would be misleading, as this singer is quite a bit heavier and more brutal, while still retaining a slight melodic edge. This style of singing is a nice differentiator for Grey Wolf, but the real value comes in the music. The rumbling, galloping bass playing that dominates this record makes for an epic experience, and the guitars are supporting this grandeur with their tendency to harmonize licks and provide fist-pumping riffs. Tracks like “Conan The Liberator”, which is built on gallops, and “The Axe Will Rule The Kingdom (King Kull Pt 2)”, which has a crushing bass solo, show that the band has decent songwriting chops too. Not every song is necessarily the best-written piece in this style, but there’s still a lot of worthwhile material on this record.

In general, “Glorious Death” tends to be fairly one-dimensional. Grey Wolf has found their niche, and they do little to expand beyond this; however, because they’re already different from a lot of these types of bands, there isn’t much else they need to do. Any record where early Iron Maiden appears to be the primary influence is a winner, and “Glorious Death” is yet another great example!

Highlights
"The Eyes of the Medusa"
"The Barbarian"
"Conan the Liberator"