Exalter – Obituary For The Living 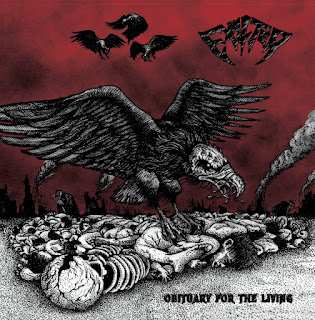 Exalter is a thrash metal band hailing from Bangladesh, and recently just put out their second EP, entitled “Obituary For The Living”. This is a serious slab of authentic-sounding thrash. While it is largely quite straightforward in its approach, it captures everything necessary for a great thrash release. Speed and riffs are in high supply on every song, and the band sounds truly energized all throughout the EP. In particular, this intensity is amplified by the huge, thick production. It’s very bass-heavy, even though the bass playing itself doesn’t stand out that much (except on “Nuclear Punishment”, where it becomes a lot louder for some reason). Instead, the guitars have a lot more low end than a lot of similar styled guitar sounds. Despite this emphasis on bass, the guitars are still relatively crunchy, making the riffs even more lethal. Unsurprisingly, Exalter’s vocal approach is also relatively safe. They opt for the classic Paul Baloff style of shouting, aided by gang vocals where appropriate.


If I do have one slight criticism of “Obituary For The Living”, it’s that the record always feels like it is waiting to explode, without actually doing so. As noted above, this EP does have speed (as any thrash release does), but it never truly kicks into overdrive. In other words, Exalter doesn’t quite reach the same tempos that many of their peers do. The result is that you’ll always be headbanging during these songs, but never enough to induce some serious neck pain. Nevertheless, this is still quite a potent release because of the sheer number of riffs. Tracks like “Sacrificial Immolation” and “Throat Cutters” do exactly as their names describe, as they cause serious amounts of thrashing mayhem. On the whole, “Obituary For The Living” is a very solid release. Given that this is only their second EP, Exalter shows a lot of potential for the future, and is definitely a band to keep watching.

at 8:42 AM
Email ThisBlogThis!Share to TwitterShare to FacebookShare to Pinterest
Labels: 2016, Bangladesh, Exalter, Obituary For The Living, Thrash Metal