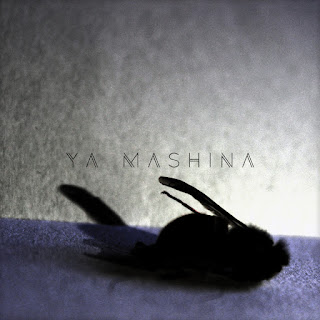 Winterblind is a black metal band that hails from Belgium, and has just released their first full-length album, “Ya Mashina”, in mid-2015. The first thing that you’ll notice on this record is that the production is very muffled. It’s almost as if they put something over the microphone before recording. Of course, given that this is black metal, the sound is very intentional. It’s a bit of a strange choice as the production itself sounds good, but it just sounds very quiet and different from anything else, making it a jarring record to listen to before or after another one. It won’t take long for you to forget about this, however, because the opening track “Sol”, quickly unleashes some thrashy riffing. This is a common theme on “Ya Mashina”; the band’s genre can’t quite simply be labeled as just black metal as they incorporate a variety of influences, with thrash being a major one. There are also plenty of more progressive sounding moments on the album, and progressive metal is probably the best label for the album. The only real constant is that the vocals tend to stay in the black metal realm, with disgusting screams being the preferred method of attack.


This versatility is also the record’s downfall. The band changes things up often, and never quite settles in on a sound. As a listener (and a reviewer), it’s difficult to really latch onto anything. Whenever Winterblind gets into a groove, it disappears. Sometimes this happens when they’ve come up with a truly headbanging thrash-inspired riff, while at others it is in a more melodic, atmospheric section, but it seems to occur relatively often on every song. While I do appreciate the prime characteristics of many subgenres (and in black metal’s case, atmosphere is right at the top), if the songwriting isn’t there, it’s hard to enjoy. This isn’t necessarily a knock on Winterblind; some people are going to love this sound, but it’s so far removed from the elements of metal I like that it’s difficult to get into.