Deeds of Flesh - Portals To Canaan 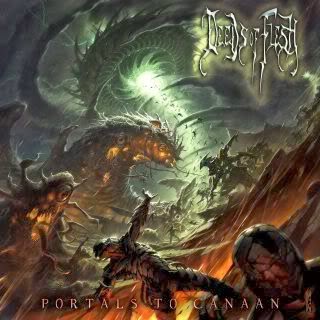 For the better part of 20 years, California’s Deeds of Flesh has delivered uncompromising, pummeling brutal death metal. In 2013, they put out their 8th full-length record, “Portals to Canaan”, and it falls right in line with what you might expect at this point. As a very casual fan of the band prior to my experience with this new record, it was easy to say that “Portals to Canaan” delivered exactly what I thought the band was about. From the opening riff of the first track, you are immediately hit by a relenting groove before being thrown into a surge of technicality and heaviness. This short explanation describes the vast majority of the album. There were some surprises for me. I didn’t expect there to be a number of sections with voice-overs and strange sampling. There’s also some decent use of melody in the lead guitars (such as in the ending of the first track).

It’s worth expanding on the simplistic definition of brutal death metal given above, because Deeds of Flesh definitely do this differently from some bands. For one thing, there is a healthy variety of beats in the drumming. This record isn’t simply 40+ minutes of blast beats (though it does feature about that much double bass). The vocals are not of the gurgly kind, but rather, a more old-school approach with some influence from the more brutal bands of the early 90’s (Suffocation and Cannibal Corpse, namely). The guitars provide the greatest array of different sounds, as they range from the unbelievably groove-oriented riffs into particularly technical, before delving into a solo. Cross something like The Faceless with Suffocation and Pathology and you would get an apt picture of the guitar work on “Portals to Canaan”.


There is a strong extra-terrestrial theme to the album, as certain sections feature robotic/alien-like sounds over top of very muted, rhythmic chugging riffs. The ending of “Entranced In Decades of Psychedelic Sleep” is the best example, but a number of tracks display this sound. In some respects it does make the band stand out, but on the other hand, it really doesn’t add any value to the music (unless you can somehow connect with it on an atmospheric level, but I certainly can’t). Overall, “Portals to Canaan” is a respectable brutal death metal offering. Deeds of Flesh doesn’t reinvent the wheel, but they didn’t set out to do so. The songwriting is fairly good given the general monotony of the style, but you’ll need more than a few listens to fully digest this album.