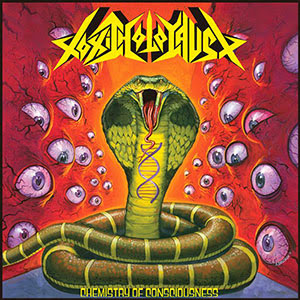 I love most new thrash, but there is one criticism of it that is very easy to make. Aside from a few bands, most of these bands are out to sound like their idols. While they still enjoy bands like Iron Maiden, Diamond Head, and others, they do little to incorporate these bands into their sound. Likewise, few new thrash bands remember that thrash came about partly because of the influence of punk. The biggest exception to this has always been Toxic Holocaust. They’ve already delivered several brutal albums of punkish thrash, and their newest release, “Chemistry of Consciousness” is no exception.

The opening track, “Awaken The Serpent” is the best example of this sound. With its simplistic riffing and loose drumbeats, this song displays an energy unlike anything else you hear in thrash nowadays. The vocals of Joel Grind take this in a bit of a different direction, as he literally shreds his voice to pieces as he spits out lyrics. This vocal style takes much more influence from the blackened side of thrash, and adds some variety to the record. Aside from the opener, most of the other songs follow a similar format. They’re all pretty short, feature relatively straightforward riffs, and are a burst of aggression. The biggest exception to this is “Rat Eater”, which is the only song over 3 minutes, and that’s because it opens with a slower, heavy intro before the song morphs into something similar to the rest of the record.

Generally, this album is at its strongest when the band sounds as quick and raw as possible. The more punk that a song sounds, the more convincing it tends to be. This applies to the first track, as well as “Out of the Fire” and “I Serve…”, which are the other huge highlights. The reason these tracks are most successful is because they compliment the sound of the album. As mentioned earlier, Joel’s vocals are truly vicious, and the guitar tone follows a similar lack of listener-friendliness. The instruments sound pretty fuzzy; it’s almost like both the guitars and bass are as overdriven as possible. The drums are not particularly modern sounding. They aren’t excessively loud, and the snare doesn’t have that high ping that plagues many other bands. In addition, drummer Nick Bellmore does a great job in alternating between standard thrash beats and more traditional punk beats. These punk beats put more focus on the timing of the bass drum, and tend to reduce any sense of monotony this album gives off.


Ultimately, “Chemistry of Consciousness” is an album that is going to please fans of Toxic Holocaust. It’s a concise effort that accurately depicts the band’s sound, while still maintaining the quality they’ve brought in the past. It avoids pretty much everything that can ruin a thrash album (being too long, boring songwriting/lack of variation, etc.). It would be a surprise to not see this on many year-end lists!

Highlights
"Awaken The Serpent"
"Out Of The Fire"
"I Serve..."